When people make mistakes, their first inclination is to hide.  This is "as old as Adam", as the saying goes,  perhaps because Adam and Eve hide from God after making their mistake with the "Tree of the Knowledge of Good and Evil".  The second question recorded in the Bible is designed to flush out and bring to the surface both the one hiding, and the mistake that caused him to hide: "Who told you that you were naked?"  After admitting his shame at being naked, Adam keeps trying to hide, coming up with more excuses and obfuscation: the serpent, this woman you gave me, etc.  All of which increases the shame, and the guilt, and the mistakes.

Adam's problem here is our problem as well, and the consequences of the fall continue, including our condition of sinfulness, which is expressed in our shame and hiding from God, which then continues the cycle described above and in other posts on this blog.  One secular analogy to God's second question to Adam is the "Watergate" interrogatory: "What did you know, when did you know it, and who did you tell?"  The length of time between each of these parts, usually documented by a paper trail, flush out and bring to the surface the one hiding, and the mistakes that caused them to hide.

From the paper trail that we can find, it appears that the president of the Minnesota South District knew about the problems with their Articles of Incorporation prior to their 2009 convention.  But no record can be found of any discussion of the void and invalid articles in the minutes of their directors meetings, or the convention proceedings from 2009.  This raises more questions for the president of the corporation (the District President):

1. When did you become aware of the problems with the Articles of Incorporation?  In 2006 before, during, or after the convention?

2. Did you share this knowledge with your voting members at any time so they might be asked for a remedy, or did you take some kind of action to attempt to correct this problem without informing them?

4. Did you share this information with your Directors at any time prior to their action to sell the property?

5. Who else was aware of the unfiled amendment changes?

7. Did you tell Synodical President Harrison and Minnesota North District President Fondow that Minnesota South had the right to sell the property at 1101 University Avenue?

8. Did you also tell them that this was based on amendments to articles you filed on your own authority and discretion without informing your pastors, congregations, or directors?

9. Did you share this information with other officers of the corporation?  Which ones, and when?

Luckily, we now have a paper trail that can answer some of these questions in the sworn affidavit given by the president to the Fourth Judicial District Court of Minnesota on May 7, 2012.  Here is section 36:

So presumably we have in this affidavit an answer to question 1: the president knew as early as 2006 about the problem, soon after the convention.

The answer to question 2 ("Did you share this knowledge with your voting members at any time so they might be asked for a remedy, or did you take some kind of action to correct this problem without informing them?") is given in the sections 39 and 40 of the affidavit: 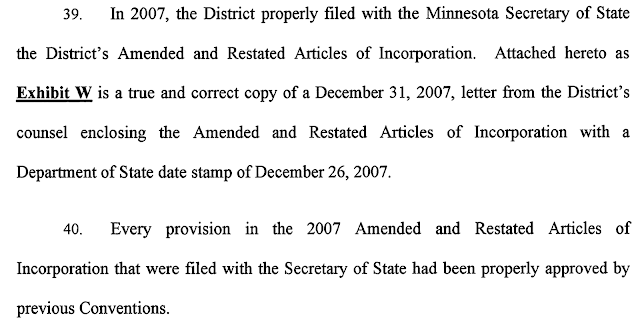 So the answer to question 2 is "No, I did not inform them or ask for their remedy, and yes, I acted on my own to try to fix this problem".

As demonstrated in earlier posts from the publicly available documentation, both the 2007 and 2009 attempted filings for record with the Secretary of State have insurmountable defects and problems.  Number 40 of this affidavit compounds has already been proven to be demonstrably false from the attempted 2007 filing itself:

Previous conventions have never approved "Article III, Section 2: Meetings, a", which the president claims they have in his dubious filing from 2007:

"The regular meetings of this corporation, called District Convention, shall be held in the year in which the general convention of THE LUTHERAN CHURCH–MISSOURI SYNOD is held"

This points to an answer to question 3 ("Did you share this with your members in convention in 2009, along with the fact that you had filed the changes using your sole (invalid) authority in 2007, and allow the convention in 2009 to remedy this?").  The answer would be "No".

As for questions 4 through 9, and our hope is that the delegates to the convention being held this week will demand answers.  They - and apparently the directors - have been kept in the dark for 6 years.  It's time to shine a light on what has been kept hidden for far too long.
Posted by Administrator at 11:27 PM