In earlier posts, we detailed how mistakes can lead to other mistakes, and be very, very costly.  Covering up for earlier mistakes and errors is often a very expensive proposition, and correcting mistakes once those involve can admit them is also expensive.

What is rare, however, is to intentionally cost your corporation $300,000 by hastily signing a purchase agreement with another potential buyer for less money.  And, last week, in one of the ongoing hearings in the litigation between University Lutheran Chapel and the Minnesota South District, we may have something even more rare: Doran Development, with which the Treasurer of the District signed a purchase agreement within 10 days of the action of the Board of Directors, apparently has dropped their purchase price for the University Lutheran Chapel property from 3.5 million to 3.25 million.  Common sense, of course, would dictate that the seller (whatever legitimacy their actions may or may not have) then place the property back on the market, especially when they know they can get a better offer.

In this case, however, the seller already knew that Doran's offer of 3.5 million was already beaten by a 3.8 million dollar offer from CPM Development.  And, in addition to offering more, CPM would also "keep a space designated for campus ministry on-site.  CPM is working on a similar project with another church".  This is from the affidavit filed on May 12th with the Fourth Judicial District: 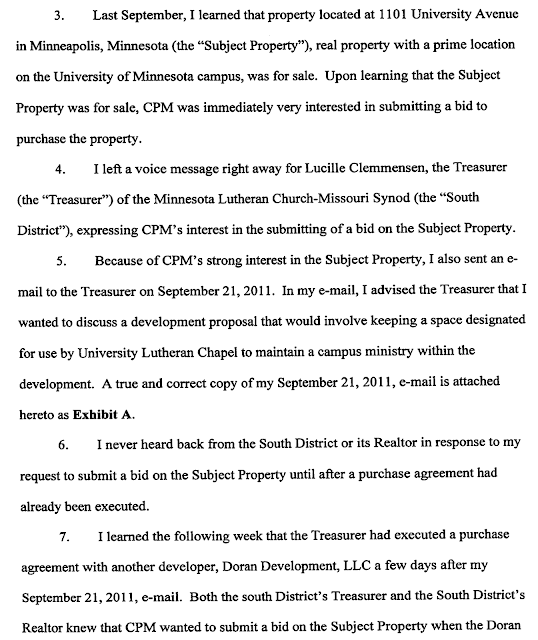 This is from page 2 from the exhibit and affidavit from the president of CPM.

Well, that's unfortunate, but with any luck this fumbling and lack of responsiveness did no harm if CPM's offer was the same or less than Doran's.

So CPM made an offer for 3.8 million compared to Doran's 3.5 million.  Haste makes waste; had the Treasurer waited for longer than 10 days to sign an agreement, there probably would have been more offers: 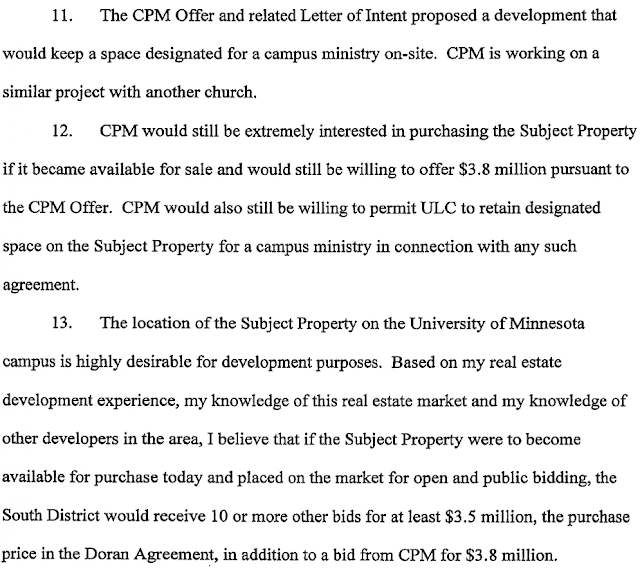 With the developments last week, Doran's 3.5 million has now apparently been reduced to 3.25 million.  Even if Doran's offer had remained the same, that would still be $300,000 less than the offer from CPM.

The other striking feature of CPM's offer is that it would allow University Lutheran Chapel space for campus ministry in the new building.  And, of course, who knows what offers would have developed if more time were given to the bidding process.

Why the haste?  What was the reason for the rush?  A reasonable inference would be the officers and directors of the Minnesota South District wanted the sale to go through before they would answer to their voting members at their convention next week, and they wanted to make sure there was no possibility that University Lutheran Chapel would still have space on the property in the new building.  Since this has already been done at other campus ministries in the church (for example, at University of Wisconsin Madison) it is staggering to think this did not occur to the officers and directors of the corporation.

As of this writing, University Lutheran Chapel remains in the building at 1101 University Avenue in Minneapolis, and is still fighting.  It's time to reverse this sale, and stop trying to cover over past mistakes by making greater and greater mistakes.  God willing, the voting members at the convention next week will do exactly that.

Posted by Administrator at 5:00 PM