Everybody Makes Mistakes, Part 2: Mistakes Can be Costly

Mistakes can be costly.  Sometimes the cost of correcting mistakes overwhelms those who make the mistakes.  This can cause them to make other mistakes, to avoid correcting the previous mistakes, and this vicious cycle can continue for a very long time.

The sad part is that this is all avoidable.  Admitting the mistake and correcting the mistake is the God pleasing and best way to break the vicious cycle.  Christians can recognize an analogy to the condition of the sinner in this self perpetuating closed loop of mistakes to hide previous mistakes.  Martin Luther, quoting Saint Augustine, called the human condition of sin "incurvatus in se".  That is, our nature is "turned in upon itself" by the first sin, so that it seeks all things - even God Himself - for its own sake.  This is one of the reasons why Lutherans believe that God must break through this closed loop of human efforts seeking to justifying ourselves by something within ourselves.  There is no "Christ Plus", that is, "Christ Plus" our works, our will, our intellect, our discipline, our obedience, our piety, our cleverness.  There is just Chist Alone, given to us in faith by the Holy Spirit using the Word and the Sacraments.  God saves us without regard to anything that is in us, to paraphrase Saint Augustine.

Perhaps the greatest tragedy of this closed loop of mistakes and sin is the efforts of those "inside the loop" to attract and pull in those "outside the loop".  The insiders will rush decisions and actions so that the outsiders (those members to whom they answer or who disagree with them) will have great difficulty correcting their mistakes.  This will often involve signing contracts and agreements that make correcting their errors extremely expensive.  The outsiders are then faced with an unpalatable choice: doing the right thing and correcting the mistakes of the insiders, sometimes at a high cost, or doing the wrong thing, and being drawn into the closed loop in order to avoid the cost of correcting the errors.

This post continues our examination of the decision of the Board of Directors of the Minnesota South District of the Lutheran Church – Missouri Synod to sell the campus ministries at Mankato and Minneapolis.  While the wording here may be a bit clumsy, the "insiders" are the directors, officers and staff of the District, and the outsiders are the members of the corporation, the pastors and churches that make up the voting membership.  The closed loop in this case began years ago with the failure of previous officers to follow the corporations own article.  It was compounded in 2007 and 2009 by filing void and invalid articles with the Minnesota Department of State.  And it reached its current state with the decision to sell those two properties, and signing a contract for sale for the campus ministry in Minneapolis.

And the cost of their mistakes are indeed high.  This is from their own exhibit AA given to the Minnesota Fourth District Court: 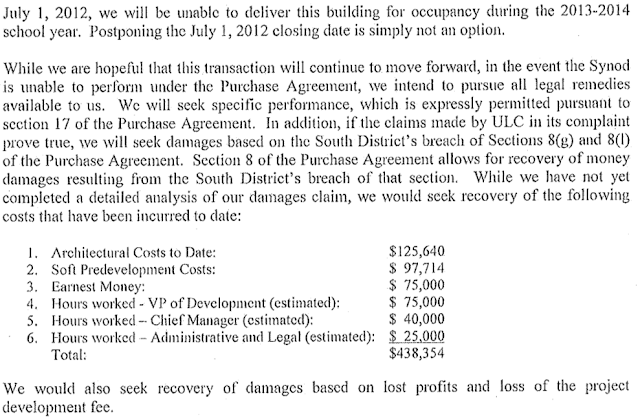 This is from the company which signed the purchase agreement in a letter dated May 3, 2012.  The purchase agreement here is the one signed by the Treasurer of the Corporation 10 (ten) days after the directors moved to sell the campus ministry at Minneapolis for "no less than" 3.2 million, and delegated the sale to the Treasurer of the corporation.

In fairness to the Treasurer, it must be said that she was placed in a very difficult position.  The directors had been asked, repeatedly, for years to bring the decision of a sale to their voting members in convention.  The next convention is the second week of June.  The directors knew that the proposed sale was extremely unpopular, and would be opposed vigorously by their members.  They should have approved the purchase agreement (and taken the well deserved criticism for it) themselves.  That would have been the right thing to do, instead of hiding behind a delegated action and giving the appearance of "clean hands".  This also gives the appearance that they are hiding from their members by completing the sale before the voting members meeting in convention in June.

3. If you did not seek advice, what kind, and what were the results, of the research and diligence you performed in the ten (10) day period between the director's motion and your signature of the purchase agreement?

4. What kind and sort of negotiation did you do with other prospective purchasers during this ten (10) day period?  Did any kind of discussions or negotiations take place before the ten (10) day period?   Did you attempt, or were you advised to attempt, to have the purchaser delete or modify sections 17, 8(g) and 8(l) of the purchase agreement which are now the basis used to seek a minimum of $428,354 from your corporation?

The voting members of the corporation will have a choice at their convention in June.  Do they do nothing, and become part of this cycle of error?  Or do they do the right thing, and correct these mistakes?
Posted by Administrator at 11:59 AM