Are These Articles Valid, Part 3: 1974 and Other Disasters

In the previous posts we examined the various difficulties with the Articles of Incorporation for the Minnesota South District filed for record in 2007 and 2009, and why the Articles previously filed in 1966 may be the only valid articles for the corporation to date.  In this post, we consider why many changes to their Articles of Incorporation made over 40 years were never "recorded with the Secretary of State of Minnesota, according to law", which is a requirement of Article IV, and why the articles filed for record in 2007 and 2009 also fail to meet the corporations own standard for validity.

Let's start with the obvious: the documented and bizarre fact that for over 40 years, 3 (or possibly 4) District Presidents of the corporation did not file a single change in amendments with the Secretary of the State of Minnesota.  So why was this?

One possible explanation is that during this period of four decades, changes in Articles that were approved by the voting members in Convention appear to be recorded in the corporation's own Handbook.  The officers of the corporation, including the District President, may have assumed that since the changes in Articles were included (incorrectly) in the Handbook, they had already been certified, verified, and correctly filed for record with the Secretary of State.

If so, the next question would be why this was overlooked for some 40 years, especially since Article IV is clear on the necessity of certification being done by the "presiding officer" at the convention(s) which made the changes in articles?

It becomes more puzzling because on at least one occasion, the corporation filed a change of registered address with the Secretary of State: 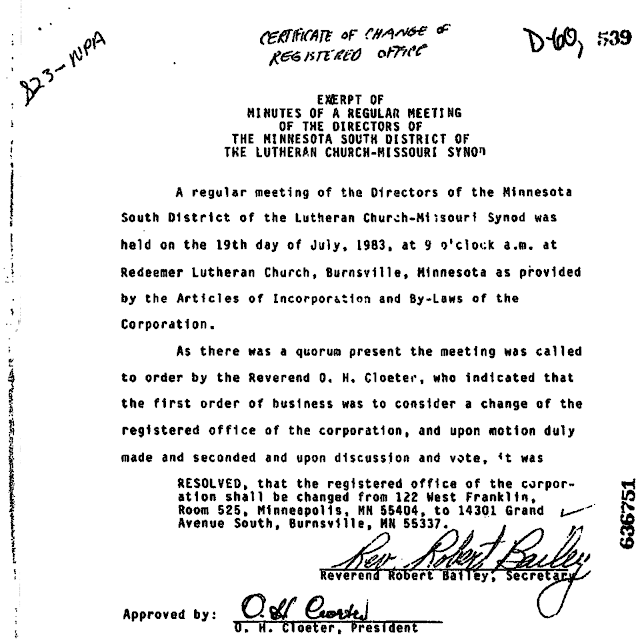 This is followed by the a notarized change of address: 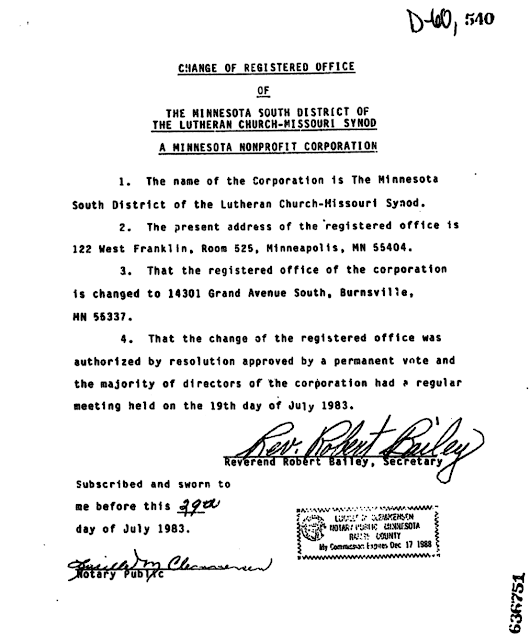 And finally it is recorded by the Department of State: 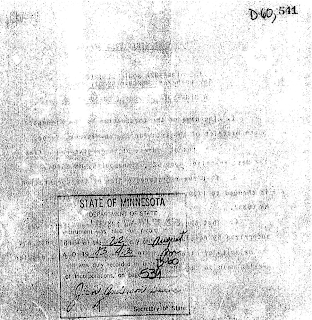 This does not explain why the amendments to articles were not validly made over a 40 year period, but it does demonstrate that the corporation was at least aware that some kind of filing was required with the Secretary of State ("Department" here).

Another explanation may come from the conventions themselves, and in particular, the convention from 1974.  The Convention Manual for 1974 proposed 36 changes to the Handbook on pages 65-75.  Two of these were proposed changes to the Articles of Incorporation.  The first proposed reading was to Article III, Section 3. Duties of Officers, d), 6.: 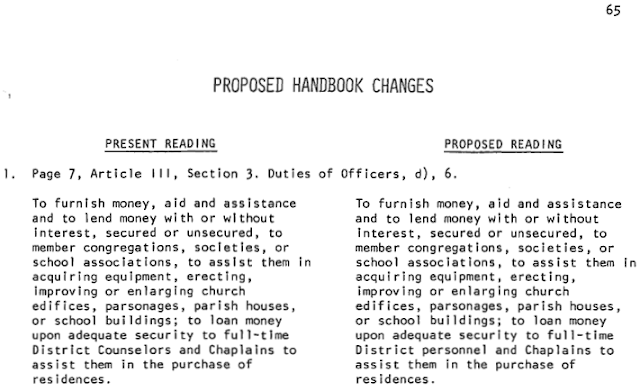 The second proposed change to the Articles of Incorporation was reading 25 on page 71:

This is the "restrictive article" from the 1966 Articles of Incorporation that reserves to the voting members the authority to sell "1101 University Avenue S.E.", or ULC.

So we can be assured this amendment, reading 25, was (1) presented correctly and in a timely manner, (2) passed with the requisite vote, (3) was properly certified by the presiding officer of the 1974 Convention, (4) verified by the secretary of the corporation, and (5) filed according to law with the Secretary of the State of Minnesota.

Except we can't.  Earlier posts have demonstrated that 3, 4 and 5 did not occur.  And from the 1974 Convention Proceedings, it is difficult to determine with confidence if 1 and 2 happened.  Here's how the Convention Proceedings from 1974 records the action taken on these 36 proposed changes to the Handbook for the first reading on page 21:

Other proposed changes are listed by recording an action of the convention, for example on page 22 with two proposed deletions to the bylaws:

This continues until page 24, when we find this:

Finally we come to the end of the proposed readings where we find this on page 26: 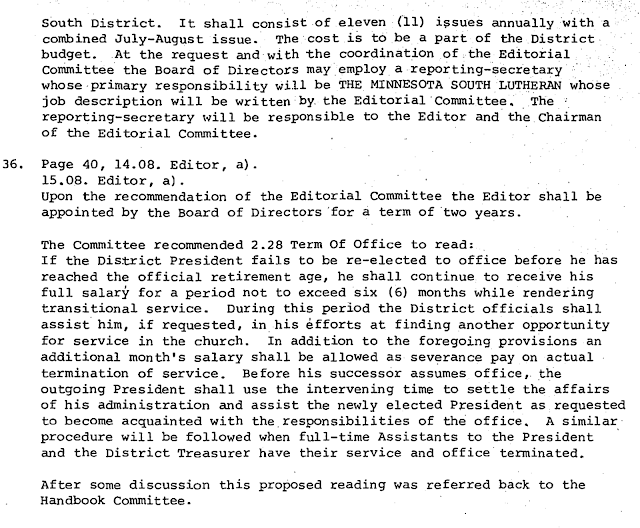 The last sentence is problematic, because the beginning of the section on Handbook changes reads:

"Rev. Bernard Johnson, Chairman of the Handbook Committee, presented the proposed Handbook changes to the Convention.  The following changes were adopted:" (see above)

But at the end of the section, listing all 36 readings, we have this sentence:

"After some discussion this proposed reading was referred back to the Handbook Committee."

So what was "referred back" to the Handbook Committee?  Was it the entire reading of all the changes, or just the change proposed in reading 36?  To add further ambiguity, there are no vote totals recorded.  If the phrase "two-thirds" majority in Article IV means that changes to articles requires two-thirds, then it is possible that the by-law changes passed by a required simple majority, but reading 25 failed to receive the required two-thirds majority.

Given this confusion, the presiding officer (President Lieske) and the secretary may have been unable to verify, certify and then file these two changes to the articles with the Secretary of State.  Or the Handbook Committee needed more time to rework the Handbook because the items had been "referred back" to them, and by the time they finished their work, no one bothered to file the two articles of incorporation that had been amended.

Or all of these changes passed with the required majority, and the presiding officer (or the secretary of the corporation) simply decided not to certify, verify and file these changes with the Secretary of State.

So did the attempt to file amended and restated articles in 2007 and 2009 "fix" this?  Since both of these filings are failed and invalid in their own right, it is difficult to imagine how this could be.  Neither of these filings were "verified by the secretary of the corporation".  They were both filed with a sworn affidavit that incorrectly states that the District President has "the authority to sign this document on behalf of the corporation", which he does not.  And both lack the certification "by the presiding officer", which President Seitz could have done only for those article changes after 1991, and not for amendments to articles done earlier, such as these two in 1974.

How could this have been avoided?  The most obvious way would have been for the presiding officers at the conventions from 1969 to 1991 to have simply followed Article IV's requirements for amendments.  For some unknown reason, they did not.

Another option would have been for the presiding officer of the 2006 convention to have presented the restated and amended articles to that convention in their entirety and ask for them to be approved, as was done in 1963 and 1966.  The failure to do this is particularly odd, because presumably the 2006 convention would also have had a Handbook Committee.

The next option would have been for the presiding officer of the 2009 convention to do the above instead of presenting two changes to the articles which appeared to be cosmetic.  This is also odd, again, because there were other changes to articles that were presented to the convention.
Posted by Administrator at 10:02 PM