Are these Articles of Incorporation Valid? (Part 1)

Since this site is called "Friends of ULC", we do what we can to help ULC, that is, University Lutheran Chapel of Minneapolis.  In the last few weeks that means following the litigation begun by ULC against the Minnesota South District of the Lutheran Church - Missouri Synod.  In Minnesota, this is surprisingly easy to do.  There is an excellent website from which you can order all the documents filed by any corporation registered in Minnesota with the Secretary of State.  It's a bit more of an effort to get documents from civil actions, but that too can be easily done with the MNCIS system and a trip to the Court Administrator (in this case, for the 4th Circuit/Hennepin County).  Concordia Saint Paul has most of the convention workbooks and proceedings, and Concordia Historical Institute has all kinds of historical records and documentation.  And all of it is available to the public.

The Secretary of State has filings (which are usually for Articles of Incorporation, Amendments to Articles, and change in official address) for the Minnesota District for 1903, 1909, 1929, and 1939.  For the two successor districts, the Secretary has filings dated 1963 and 1966 for both Minnesota North and South, 1984 (Minnesota North) 2007 and 2009 (Minnesota South).  There are other filings for change in registered address, filings at the county level, but these cover the changes in Articles of Incorporation.

From 1903 to 2006, all three districts (the predecessor Minnesota District up to 1963, and Minnesota North and South from 1963) follow the same standard set out in their Articles as to how to amend them.  Here's an example from 1939: 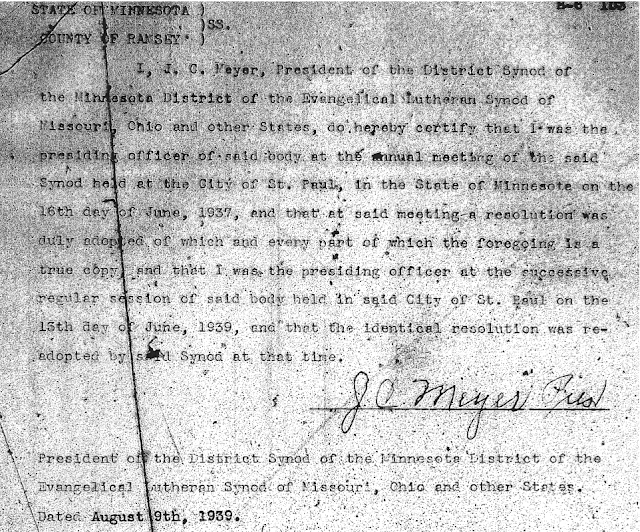 This is the certification by the presiding officer of the regular meeting (convention): "I, J. C. Meyer, President of the District Synod of the Minnesota District of the Evangelical Lutheran Synod of Missouri, Ohio and other States, do hereby certify that I was the presiding officer of said body at the annual meeting of the said Synod held at the City of St. Paul, in the State of Minnesota on the 16th day of June, 1937, and that at said meeting a resolution was duly adopted of which and every part of which the foregoing is a true copy, and that I was the presiding officer at the successive regular session of said body held in said City of St. Paul on the 13th day of June, 1939, and that the identical resolution was re-adopted by said Synod at that time."

This is followed by the verification by the Secretary of the Corporation (in this case, the Minnesota District Synod): 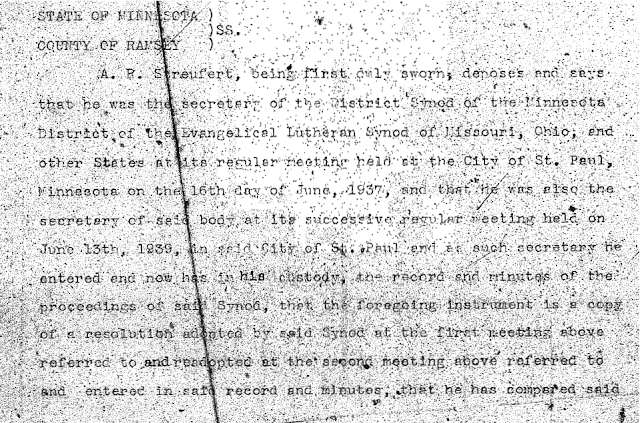 "A. R. Streufert, being first duly sworn, deposes and says that he was the secretary of the District Synod of the Minnesota District of the Evangelical Lutheran Synod of Missouri, Ohio and other states at its regular meeting held at the city of St. Paul, Minnesota on the 16th day of June, 1937, and that he was also the secretary of said body at its successive regular meeting held on June 13th, 1939, in said city of St. Paul and as such secretary he entered and now has in his custody the record and minutes of the proceedings of said Synod, that the foregoing instrument is a copy of a resolution adopted by said Synod at the first meeting above referred to and readopted at the second meeting above referred to and entered into said record and minutes, that he has compared said copy with the original resolution and of the whole thereof, and the same conforms with said original entries."

Then comes the last step of the process to amend the articles of incorporation: The Secretary of State receives the examined resolution, certification and affidavit (in this case by the Attorney General) and completes the process by filing it for record: 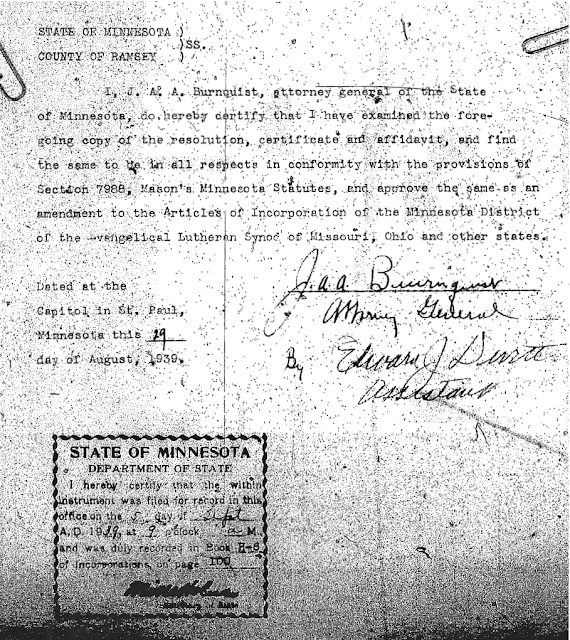 The process over the years has become slightly modified from this, but these steps remain the same up until the present day: amendments to articles are presented in the proper amount of time (i.e, in the Convention Manual), they are voted on and the results are recorded (the Convention Proceedings), then the presiding officer at the meetings certifies, the secretary at the meetings verifies, and their affidavit is taken and examined and placed filed for record with the Secretary of State.

Now consider the changes to the Articles of Incorporation in 2007 and 2009 made for the Minnesota South District: 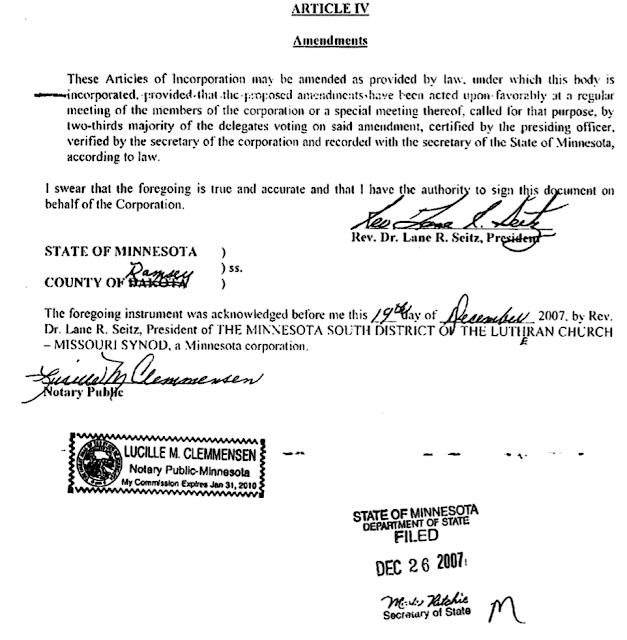 Several things are striking about this document:

1. There is apparently no certification by the presiding officer and no verification by the Secretary.  There is only the sworn affidavit by the District President that "the foregoing is true and accurate and I have the authority to sign this document on behalf of the Corporation".

3. How could the District President first elected in 1990 be the presiding officer for conventions that occurred from 1967 to 1989?

4. How would that same District President be able to certify those amendments to the articles?

5. Why is there no verification by the Secretary of the Minnesota South District?

6. Why were these amendments filed in a year when there was no district convention (regular meeting)?

Two years later in 2009 we have something very similar: 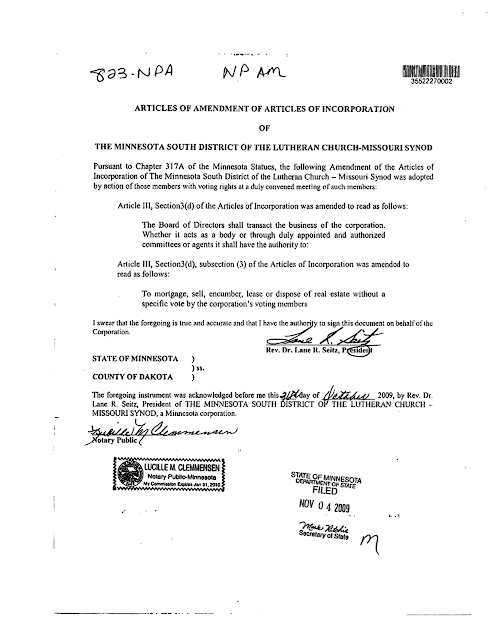 This has many of the same problems as the 2007 document, and raises a number of additional questions:

2. Why were only these cosmetic changes presented to the convention instead of asking them to vote on the entirety of the articles that were filed in 2007?  This would have allowed the actual presiding officer of that convention to certify the articles, and the secretary to verify them, two requirements of valid articles of incorporation.

All of which raises the question, are these Articles of Incorporation filed in 2007 and 2009 valid?  If not, then the last valid articles of incorporation are from 1966, and those articles require that the membership of the corporation (the Minnesota South District) must vote on the sale of "1101 University Avenue" (ULC).

More on that in the next post.
Posted by Administrator at 11:10 PM