In the previous post, we discussed the reasons why the Minnesota South District of the Lutheran Church - Missouri Synod may have filed for record invalid Articles of Incorporation with the Secretary of State.  We demonstrated from the publicly filed documents that it was impossible for the  officer of the corporation to be the presiding officer of meetings before 1990, and therefore impossible for him to certify the article changes to which he swore in 2007.  So what happens when an officer of a corporation gives the Secretary of State a sworn affidavit that is not true, valid, or correct?  In some cases, nothing.  The error (or in some cases incompetence or perjury) makes no practical difference.  If the corporation takes no action based on the invalid articles, or if their actions are permitted from the valid articles filed previously, then the error may never come to light.  Some diligent Secretary of State, or Attorney General or county prosecutor may see it differently, in which case bad things might happen.  But they usually don't have a lot of incentive to do this, especially when it comes to a non profit corporation.

But when the corporation does take action based on invalid articles, and the valid articles filed on record previously prohibit what they have done, then very, very bad things can happen.  And that is what appears to have happened when the Board of Directors of the Minnesota South District voted to sell University Lutheran Chapel in Minneapolis.

It's better to let you, the reader, see for yourself why this is so.  This is from page 4 of the Articles of Incorporation for the Minnesota South District from 1966: 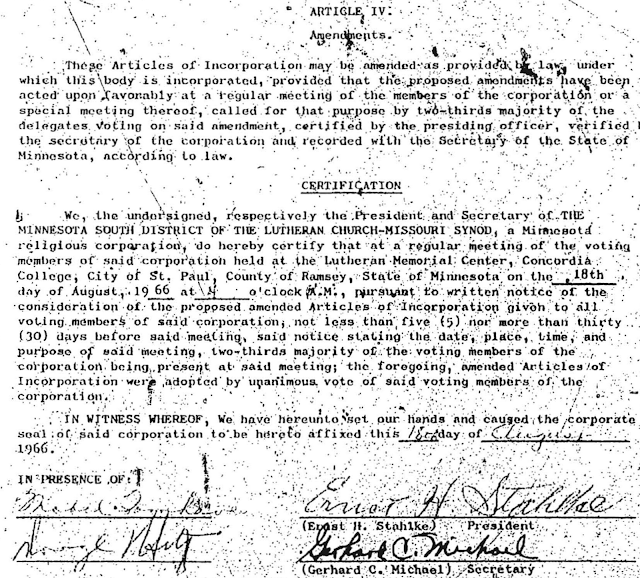 Like the 1939 amended articles from the Minnesota District, their predecessor corporation, this appears to have the necessary elements described in Article IV "Amendments".  It could be more correct by including the phrase "presiding officer" (which Article IV requires) and the secretary could verify that he has examined the documents and has them in his possession.  But it would be fairly easy to determine that President Stahlke was the presiding officer, and Secretary Michael was also present, examined the documents, and has them in his possession.  And the published convention proceedings might determine all of the above (but not always; more on that in a later post).

And, of course, we have that last essential and necessary step mandated in Article IV: "and recorded with the Secretary of State of Minnesota, according to law". 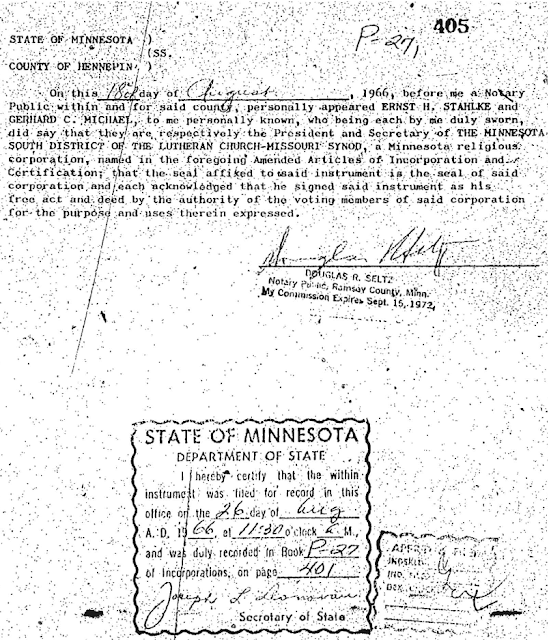 So close enough; these Articles of Incorporation appear to be valid, legal and correct.  The 2007 articles... not so much, as demonstrated in the last post.

Why is this important (or, if you prefer, "What does this mean?"):

This is Article III, Section 3 "Duties of Officers", paragraph d 3 of the same 1966 Articles of Incorporation.  "[T]he Board shall have no authority to mortgage, encumber, sell or dispose of the Lutheran Student Center and Chapel, located at 1101 University Avenue SE, Minneapolis, Minnesota"... "Unless authorized by the voting members so to do".

They did this in September of 2011 after being asked repeatedly over several years by members of their own synod, pastoral conferences and sister district conventions to do exactly what their own articles required: to seek the authorization of the voting members in a district convention.

They persist in their refusal to stop and reverse themselves even after being made fully aware of all of this by University Lutheran Chapel's litigation.

And all of this was entirely avoidable.  More on that in the next post.
Posted by Administrator at 11:56 AM