Another Convention, Another Chance to Vote on ULC? Let's Make that Happen.

Visitors to our humble little blog are probably aware that we've been doing what we can for some years to help University Lutheran Chapel (ULC) and get the word out about the sale of the campus ministry property by the University of Minnesota in Minneapolis.  We don't claim any credit for any of the good things that have happened so far, but we're glad to play some small part.

It appears as if we have another chance to do some good, or, more accurately, all of you have a chance to do some good before and during (and after, if you like!) the upcoming convention of the The Lutheran Church - Missouri Synod July 20 - 25 in Saint Louis.  The good news is that there is an excellent memorial in the Convention Workbook on page 139 "To Commend and Support Campus Ministry at University of Minnesota": 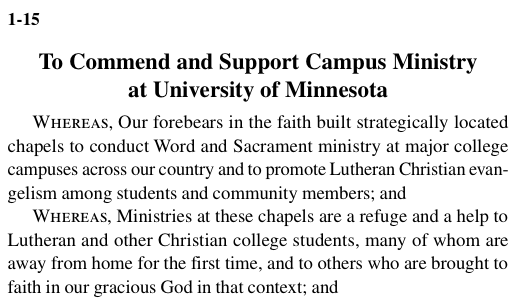 So the convention will get to vote on this, right?

Well, maybe, maybe not.  This gets a little arcane, but the process goes something like this.  Memorials to a synodical convention are sent to one of several floor committees.  In this case, that is floor committee #1 (also called "Witness"; I won't try to explain this beyond saying the names are apparently an attempt to designate the general topic area of the committee).  So floor committee #1 should do their thing, and decide what to do with the memorial.

The process might involve taking a memorial, then fashioning it into an overture, which then may or may not become a resolution (more details later will be added to this very rough description).  Floor Committee #1, however, has decided to ask the convention to decline to consider this memorial in the First Issue of Today's Business:

More posts will follow, but please consider contacting Floor Committee #1 to have them send the original memorial 1-15 to the convention delegates to have them vote on it.  If you do, make sure you are courteous, polite, respectful and follow the words of Scripture, "Speak the truth in love" (Ephesians 4:15). From what I can tell, the floor committee is open to more information, and is willing to correct whatever incorrect data it has been given to date. If it helps, you can I sent to Floor Committee #1 on 2013 June 17 or it as a .pdf file. If you are interested in the supporting documentation, you can see the other entries on this blog, or you can see the dispute resolution letter from or the .pdf File. The dispute resolution letter from is online here, and is also available for
Posted by Administrator at 1:12 PM